The Yamaha YDP 184 is a flagship model of the Arius series and is packed with a number of extraordinary features to soothe the desires of music makers all over the world. If you ask me to explain this piano in a one-liner, I would say that the YDP 184 sounds extraordinary with its CFX grand tunes and renders the freedom for the pianist to create distinct tunes. Let us discuss this piano in detail with a key focus on its distinct features and specifications.

One of few pianos that are being used by beginners as well as professional pianists. Yamaha YDP-184 suit all skill levels as it can beat any other piano in the same price range. If you have a limited budget, then YDP-184 should be your ultimate choice.

Distinct features of the Yamaha YDP 184

The Yamaha YDP 184 is seen more like a console-style piano for its wooden style chassis, heavy-duty and premium looks. Its faux wooden finish adds a lot to its charisma but it is not portable and does not suit pianist with small living spaces. Its control panel makes it a highly desired piano and sets it apart from the rest of its predecessors.

The piano has a monochrome LCD screen above the controls on the left panel and makes the modification of settings and navigation across the keyboard much better. The power button and the volume controls are at the right end of the keyboard.

The piano is available only in dark brown color with no other color options. A three-pedal setup is built into the piano and even the soft and the damper pedals have detailed sensors built into them. Overall, the fans of the Clavinova line would love this piano, especially for its easy-to-use interface and grand design.

The sound quality of this piano is simply excellent and totally different from the rest of the YUP series from Yamaha. As you play the keys of the board, you could feel that its sound resonates throughout the body of the instrument creating a rich reverberation for the audience. The Virtual Resonance Modeling feature of this piano resonates with the string sound of each of the 88 keys of this piano, along with their timing and depth of the damper pedals to create rich music with vivid expressions.

The YDP 184 as we mentioned earlier mimics the CFX grand sound and is the only piano in the Arius series to feature this sound engine. The Yamaha YDP184 has two 30 Watt speakers that are identical to the CLP 635. Its speakers are good enough to fill an auditorium with rich volume that is close to an acoustic upright.

The sound quality of this piano remains natural and detailed even at its maximum volume. The YDP 184 focuses on rendering a clean and direct sound, as opposed to the classical bass-focused tone of the other pianos in this series. The piano sounds incredible and has an upgraded version of the CFX sound engine, despite lacking Bosendorfer samples and Binaural sampling.

The Piano room is an extremely user-friendly software that helps the pianist to alter a number of parameters to shape the sound as they desire. As the piano supports half-pedaling for both the damper and the soft pedals, you can expect some great sounds out of the piano with no duds. The CFX sampling sounds, apart from covering the strings also cover other subtle aspects such as the release and resonance and even the pedal noise.

It is worth mentioning here that the YDP 184, apart from releasing the piano sounds also adds the sounds of a number of other instruments to add versatility to the performance. These are sounds of,

The sound of this piano is its highlight, we can say that the piano renders an excellent palette of sounds so as to practice different play styles. Also, the YDP 184 includes a number of sounds to substantiate its power and versatility. Its reverb unit includes a lot of new algorithms that include the concert hall, recital hall, club, plate, chamber, and cathedral. The recital hall preset is the default sound and when it gets mixed with the standard CRFX grand, you can expect some masterpieces.

Other sound effects available in this piano are the chorus and the Brilliance features. The chorus effect comes with three variations and modifiable depths. They sound great when they are played along with electric piano presets. And of course, the Intelligent acoustic control technology of the piano helps in adjusting the quality of the sound dynamically during the play.

The stereophonic optimizer feature simulates a faux surround side effect and is applicable only when you use the headphones. It actually sounds great when played along with a large hall reverb algorithm.

The YDP 184 features the Graded GH3 key bed with the plastic keys covered with ivory and ebony keytops. You don’t have to worry about wet and slippery hands as the keys are textured. The graded keys feature triple sensor key action with hammer triggers, to render the recreated feel of acoustic pianos.

The keys are highly sensitive to touch and this sensitivity comes at five different levels, starting from soft to hard, while the fixed option is the default.

Other Functions and Rhythms of Yamaha YDP-184 Piano

You can play the Yamaha YDP 184 at three different modes, namely the Dual mode, the split mode, and the duo mode. The dual-mode or layering mode helps two different sounds, preferably a piano and guitar to play simultaneously at one instant. The split mode allows the pianist to play two different tones on the left and right sides of the piano. He can decide where he needs the split.

In the duo or the duet play mode, the pianist divides the piano into two small pianos of 44 keys and identical ranges. This mode is ideal for teaching the student how to play certain chords with the hands of practice.

The YDP 184 comes with a metronome, which is the basis for practicing the piano with time and rhythm sense. You can also include rhythms to pep up variations in music, especially at the introduction and ending chords. This piano comes with 20 rhythms that cover rock, pop, jazz, and Latin beats.

This piano has very limited connectivity features but has still managed to include all necessary connections. There are stereo phone jacks to connect with headphones, a USB port to transfer MIDI files through USB, and an auxiliary input mini-jack that allows the pianist to connect with playback devices.

The auxiliary output jack can connect with amplifiers and external speakers. Its USB to device port helps to save all recorded songs as the internal MIDI memory is hardly 15 MB.

Here are the top alternatives you can consider under $1500 if you don’t want to buy Yamaha YDP184 for any particular reason.

This console-style digital piano will not disappoint anybody and is built with some of the best features, justifying its cost. Its sound quality is something nobody can resist and is regarded as a high-end and superior sounding instrument for this. It has an improved control panel that is easy to navigate. Applauses for the VRM technology of the piano as it brings about intricate nuances of the instrument. Overall 9/10 score for this amazing instrument and we strongly recommend it for intermediate and advanced pianists. 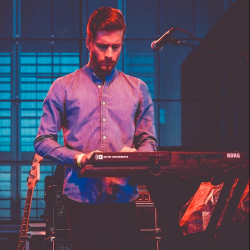 Being in love with music, Larry started this website to help piano lovers get the most detailed and accurate information with his 5 Years of experience of working in a music store.

This site uses Akismet to reduce spam. Learn how your comment data is processed.

Pianoopedia.com is a participant in the Amazon Services LLC Associates Program, an affiliate advertising program designed to provide a means for sites to earn advertising fees by advertising and linking to Amazon.com, Amazon.co.uk or Amazon.ca.